The late Jan Sawka was a longtime friend to Apparition Studio who connected many conceptual dots between Poland's cadre of graphic designers and explorations into the abstract, including the influence of European Surrealism and Dadaism throughout the 20th Century. A phenomenal colorist, his work is a study of hue and saturation to blur the lines where the dream-like intersects with psychedelia, pop art, avant-garde and other contemporary avenues.

Sawka rose to prominence as a poster designer during the 1970s. Many of his most memorable works from that time were for his series of posters for the annual Jazz on the Odra River music festivals. He trained in both Fine Arts and Architecture, incorporating the latter in a variety of stage and set design projects he worked on during in his career -- from local theater to a Grateful Dead tour. 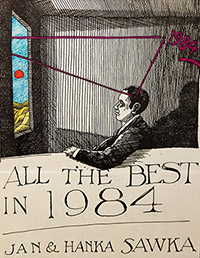 Holiday card from Upstate New YorkDuring the 1970s, besides the music festival posters, he also designed posters for 9 plays staged in cities across Poland and 6 movies, including posters for 2 major Hollywood features upon their release in Poland (the George C. Scott-directed film "Rage" in 1974 and the John Huston-directed film "Fat City" in 1975).

Through the mid-1970s, Sawka was a prominent and vocal counter-culture artist who had a tumultuous relationship with the prevailing rigid Communist regime. He left Poland for good in 1977, established his studio in New York and went on to enjoy a very successful and international artistic career, venturing into sculpture, multi-media and large displays of public art. Jan Sawka passed away in 2012, but his family has continued to operate his official web site. More information is available on our Links page -- highly recommended! 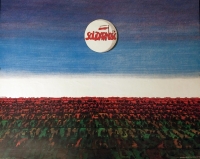