Rafal Olbinski IS POST-SURREALISM EVEN A THING?

Rafal Olbinski (b. 1945) is among the vanguard of a second wave of prominent Surrealists working primarily through the poster during the later part of the last century, following an initial wave led by Starowieyski.

Born at roughly the same time as the School of Polish Poster itself, Olbinski has been immersed in the medium and genre his entire life. A few notable examples from his large and diverse body of work: Jazz Treehouse, a poster for a major Olbinski Exhibition at Philadelphia's Port of History Museum, and Dante's Inferno.

Olbinski was born in 1943 in Kielce. He graduated from the Architectural Department of Warsaw Polytechnic, emigrated to the US in 1981 and has been a professor at the School of Visual Art in New York since 1985.  He has received more than 100 awards for his work, including Gold and Silver Medal from the Society of Illustrators and Art Directors Club of New York. You can connect to the artist's official web site directly through our Links page. 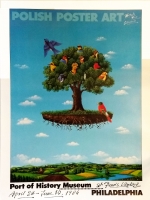