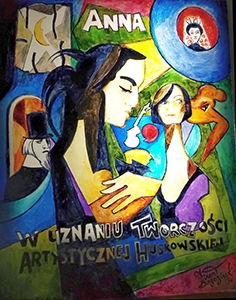 A TRIBUTE TO THE ARTIST ANNA HUSKOWSKA (Brzezinski, 2005, Oil on Acrylic, 16 in. X 20 in.)In 2005, Apparition Studio-Chicago asked Anton Brzezinski to interpret Huskowska's body of work for a special poster exhibit, and he painted this montage on clear acrylic to impart the effect of a stained glass window for the studio wall. The figures and settings in this piece suggest iconic images and typography drawn from numerous Huskowska designs spanning the mid-1950s to mid-1960s.

Also, please see the gallery dedicated to Brzezinski's work on this web site.