Though commonplace on the airwaves in much of the world for most of the 1950s, jazz music was officially banned in Poland during this period in a misguided Stalinist attempt to wall off "decadent" Western cultural influences. The genre was rarely heard on the radio, seen on TV or even available in major record stores. Nevertheless, jazz thrived in the underground arts scene and Polish musicians made their own distinct contributions to the form, adding an enthusiastic cultural signpost that serves the country to this day.

By the latter part of the decade when this movie was made, the strict official bans were slowly being lifted and Jazz was again played and enjoyed in Poland with less fear of political repression or reprisal. The innovative work of pioneers like Miles Davis and Sonny Rollins, already a decade rich in America and Western Europe, finally reached and spoke to serious musicians in Poland. "Polish Jazz" matured quickly, in confluence incidentally with the recently-reopened and edgy film school at Lodz.

In Pociag (Night Train, 1959), a suspense thriller of stark film noir qualities, the prominence of mood and atmosphere provided fertile ground for explorations in Jazz music. The result is a haunting and somewhat anxious soundtrack (by composer and musician Andrzej Trzaskowski).  Its release in1959, with the vast reach of cinema, marked the first time most people in Poland were finally hearing Modern Jazz, professionally performed. The score also opened the door for at least 10 award-winning Jazz soundtracks for Polish films over the next 8 years. 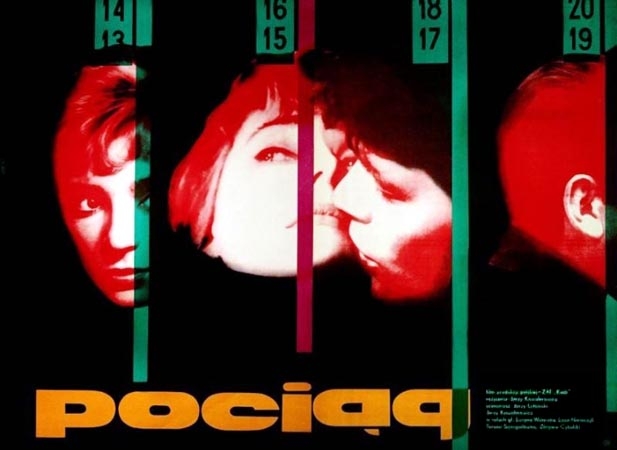 This poster for the movie (designed by Wojciech Zamecznik, 1923-1967) conjures up the long, low profile of locomotion and the claustrophic feel of an overnight ride on a train full of suspicious passengers. The image was created by combining two A1 format posters for a finished display size of 33 in. (H) X 46 in. (W). It is signed simply WZ59.