A Brief History of the Classic Polish Poster

"Artistic expression roared back in the 1950's in Poland with the same intensity and urgency of the war just past."

World War 2 and the development of the Polish art poster are inextricably linked.

Poland was the first country invaded by Germany at the start of the war (1939), was the place where the Nazi regime situated its most notorious death camps (Auschwitz, Treblinka and others), and was victim of a brutal scorched-earth policy upon the German retreat six years later. The war left much of Poland in smoldering ruins and all of it impoverished and demoralized. The earliest posters from that time are filled with themes of anger, loss, and desperation, often war-related.

The arts, in particular, were targeted for obliteration in a Nazi war strategy called the Pabst Plan. Named after its creator, architect Freidrich Pabst, the Plan targeted for destruction artistic venues, intent on weakening Poland's morale and culture by destroying its vibrant physical and architectural manifestations.

By the end of the war, 95% of Poland's theaters and cinemas, large and small, had been destroyed. Art schools, libraries, museums, archival institutions -- all of them the lifeblood of the art poster in the end --- mostly gone. Participation in the wrong literary, performing and visual arts organizations could be met with a death sentence. 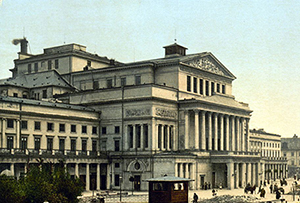 Teatr Wielki, or The Grand Theater in Warsaw, was a massive structure almost completely destroyed by German bombardment. The century-old complex housed educational, rehearsal and performance spaces for drama, opera, ballet, dance, and symphony. During the post-war regeneration of arts and culture in Poland, the theater announced it was embarking on a 20-year reconstruction project, re-opening in 1965 as a near-replica of the original. Today, it remains among Europe's largest and best-equipped venues of its type.

Artistic expression roared back in the 1950s in Poland with the same intensity and urgency of the war just past. Theaters, cinemas and performing arts centers of all sizes returned, first to the major metro areas and gradually spreading throughout the countryside.

Schools of Architecture proliferated to meet the rebuilding demands of a demolished country; many graduates applied their talents to the construction of theater stage sets and film studio soundstages, as well. A large number of architects found their way into poster design, often cross-trained at the university level.

The Film School at Lodz (pron. Wooj), established in 1948, quickly carved out a reputation for edgy productions with new arrivals such as Roman Polanski (Knife in the Water), Andrze Wajda (Kanal) and Aleksander Ford (Knights of the Teutonic Order).

International associations of film and theatrical directors, already familiar with Poland's unique contributions before the war, lent their assistance to the revitalization effort and at the same time became exposed to this rising trend of strikingly different poster art.

The drive to build a unique and different identity in graphic design, literally out of ashes,  quickly followed. Major art academies in the country began to populate their administrations and faculties with award-winning poster artists, and universities across the country created or expanded their graphic design curricula. At one of the largest and best known among them, the Warsaw Academy of Fine Arts (ASP), Henryk Tomaszewski (often called the "father" of the School of Polish Poster) became the school's first full professor of graphic design in 1955. He remained with Warsaw ASP for over 30 years, helping to recruit other top graphic artists to the faculty. Other powerhouse schools of graphic design included Krakow ASP and Wroclaw Polytechnic.

Poster art stood out, and stood out radically. Most observers ... and most poster designers themselves who have commented on the launch of the Polish School of Poster ... have pointed to a rare and fortuitous combination of favorable circumstances that ignited the movement's innovation:

By the 1960s and 1970s, poster art for public enjoyment filled the urban landscape as a matter of national identity in Poland. These days, they're in metal cases with glass doors, but the role is exactly the same.